Kintsugi: Restoring Broken Pottery With a Touch of Golden Beauty Learning a new craft doesn't need to be daunting.

Have you ever come across a piece of pottery snaked with glimmering veins of gold or silver? This is kintsugi, the Japanese art of mending broken pottery using lacquer mixed or dusted with powdered gold, silver, or platinum. This unique method of repair is thought to be more than four hundred years old and tied to distinctly Japanese aesthetic principles and philosophies. Kintsugi (金継ぎ, “golden joinery”), also known as kintsukuroi (金繕い, “golden repair”) emphasizes the breaks and cracks in a piece, rather than hiding them. In doing so, these supposed imperfections become an integral part of the item’s history and charm. Read on to learn how this traditional Japanese craft came to be and how you too can give it a go.

More Than an Art Form

The origins of kintsugi are believed to date back to the late 15th century, during the Muromachi period (1336–1573), around the time Japan’s tea ceremony was developing. The story goes that the shogun who ruled Japan, Ashikaga Yoshimasa, sent a broken tea bowl to China to be repaired. When the bowl returned, Yoshimasa was dismayed to discover it covered in bulky staples, prompting craftsmen to search for a more aesthetically pleasing method of repair. 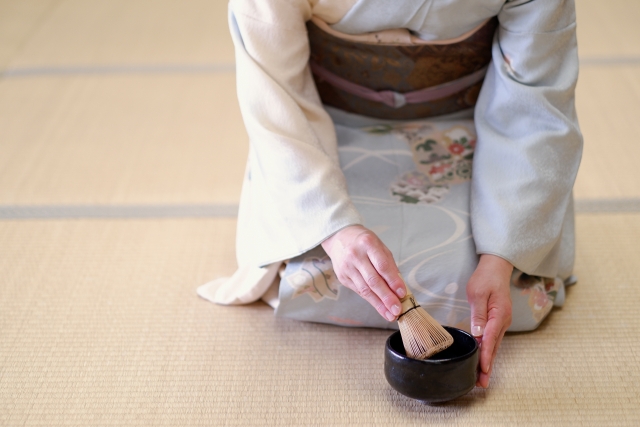 The practice of kintsugi can also be tied to the Zen philosophy of wabi-sabi, which sees beauty in flaws and imperfection. The gold lines of kintsugi emphasize the cracks in an item and beautify them in the process of repair. Similarly, by choosing to keep a broken item, instead of discarding it, kintsugi can be seen as an expression of the Japanese concept of mottainai, which conveys regret over waste. Rather than waste the item’s full potential, kintsugi allows it a second life, now with golden battle scars that demonstrate the item’s unique history.

A Centuries-Old Practice With a Modern Twist

I’ve been intrigued by kintsugi for a while but considered it too complicated and too daunting to learn. After all, kintsugi masters spend years training and honing their craft. Even fixing a single item following the traditional process can take several months. Then I discovered workshops that cater to beginners and decided to give it a go. A one-day class is a great entry point to the practice so that you can learn a few tips and have a professional guide you through each step. In recent years, kintsugi repair kits have also become more readily available online and from hardware stores. So once you’ve learned a few of the basics, you can practice by yourself at home. 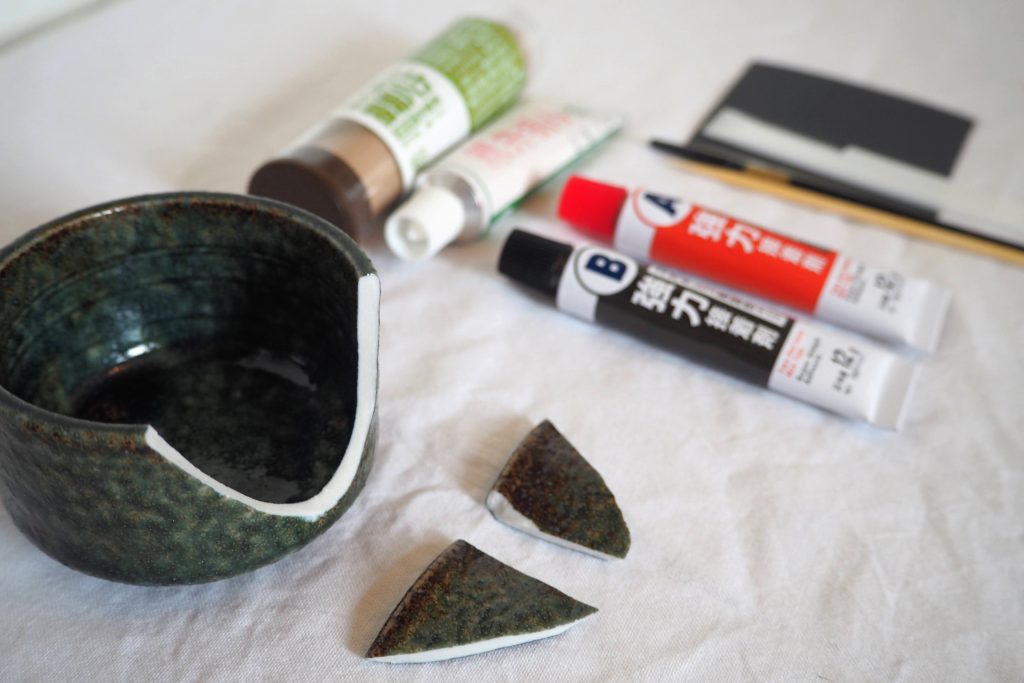 The traditional kintsugi method involves mixing lacquer and a type of binding rice flour to create an adhesive paste. However, it can be tricky to get the ratio right and the mix can take months to dry. A good option for beginners is to purchase a kit like the one pictured above, which replaces the traditional mix with a fast-drying epoxy adhesive. Although this is less “authentic,” these kits speed up the drying process and simplify the initial step.

Having broken this sake cup in three, I needed to fix the two smaller pieces together before fitting them back in. I worked with a two-part epoxy, where the components react when combined, so it was important to apply the mix quickly before it dried.

Now the cup was beginning to resemble its original form, except there remained noticeable chips where tiny fragments had broken away. I kneaded a little putty in my hand, then mixed it with a dash of adhesive and molded it into the gaps. Lastly, I used a spatula to remove the excess putty and waited for it to dry, before cleaning the cup with acetone.

This next part was especially enjoyable—applying the urushi lacquer paint in slow, careful brush strokes. Once I stopped worrying about my hand slipping, the process became almost meditative and my attention turned to simply following the cracked lines. For food safety purposes, it’s important that you completely cover all glue and putty with lacquer.

FYI: Traditional urushi is made from the sap of the Asian lacquer tree, which contains the same kind of allergic oil as poison ivy! While low-allergenic urushi is available, some types of this lacquer can cause skin reactions so take care when working with this material. 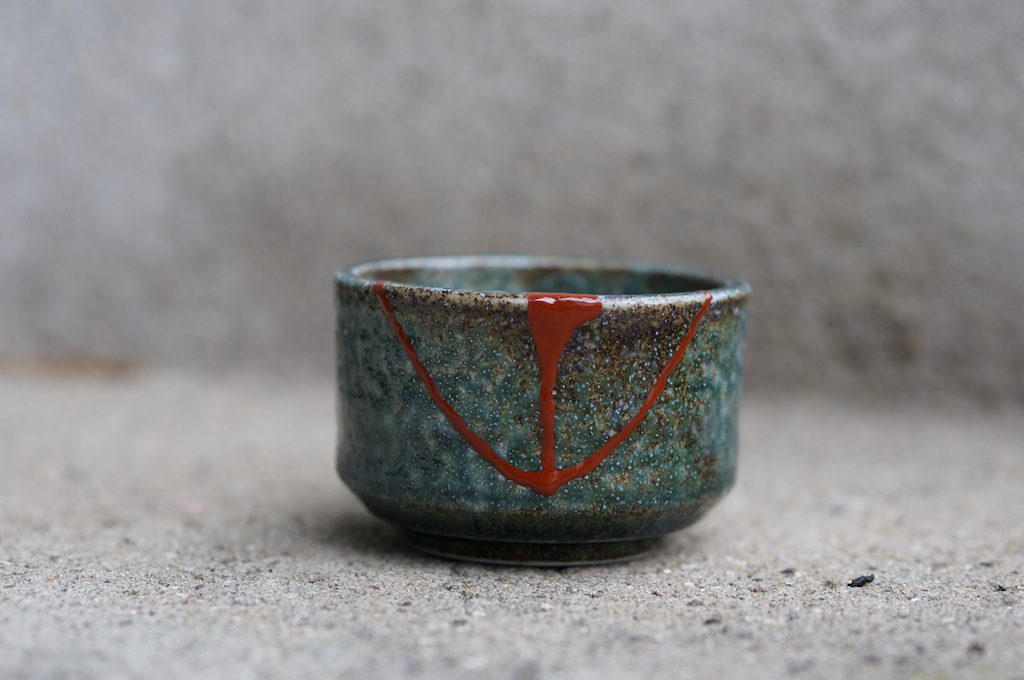 Before applying the gold, I took a moment to admire the combination of brick-red lacquer and the mottled blue-brown cup. At this stage, I realized I had been a little too generous in my application of lacquer—but I like to think that’s all part of the learning process. Rather than one thick layer of urushi, several thin layers are likely to dry better and avoid dripping. 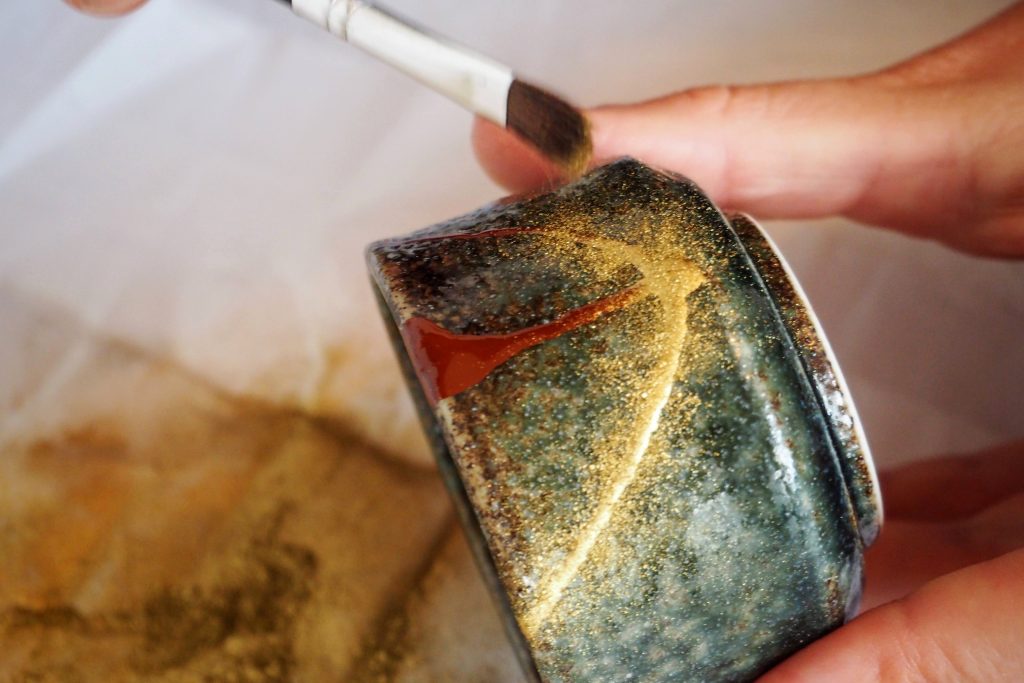 And now for the gold! I waited about ten minutes for the lacquer to become tacky before using a dry brush to gently dust metallic powder over the lines. Lacquer dries slowly so there’s no need to rush, but make sure to finish dusting the powder before it has completely dried. 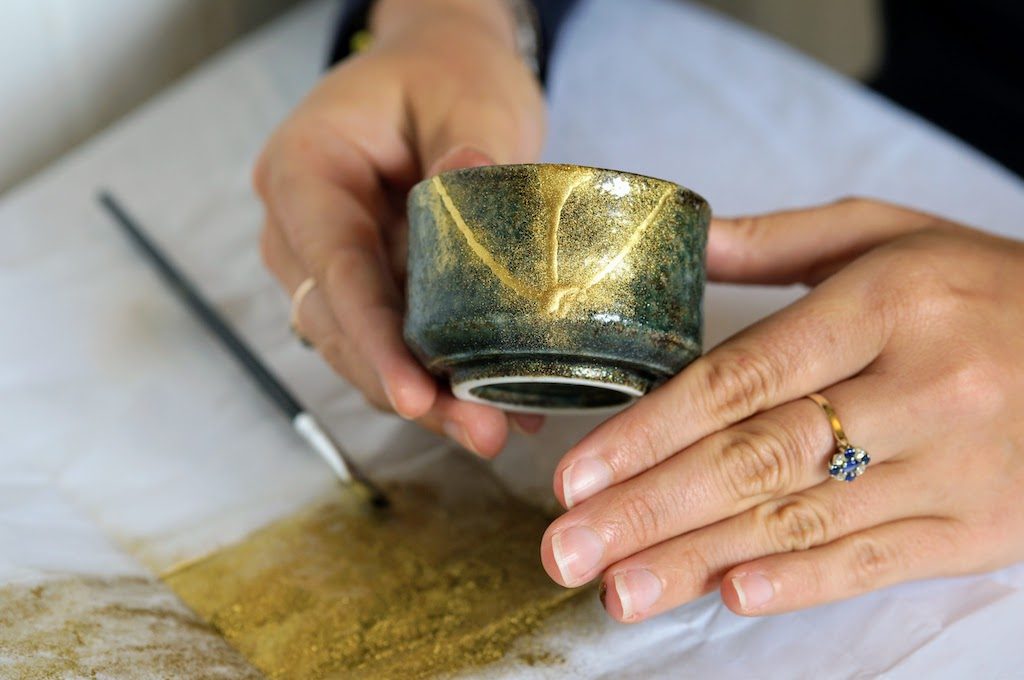 Once I had finished applying the gold powder, I carefully placed the cup in a box and left it to dry for around ten days. Urushi lacquer actually dries better in moist environments so if you live somewhere dry, consider leaving your item in a container in the bathroom.

I eventually tried out my rejuvenated cup with a tipple of Japanese sake, enjoying the glimmer of gold as a reminder of the mending process. Rather than buying a new vessel, it felt good spending a little more energy on piecing this one back together, smoothing the cracks, tracing over each fracture, before finally adding a touch of golden beauty.

Next time you drop your favorite cup or plate, consider giving it another life and mending it with kintsugi. For particularly precious pieces, I’d suggest you find a master of the craft with the necessary skills to do justice to the reparation. However, if you’re willing to try your hand at fixing a more everyday item, why not enroll in a nearby workshop or even start by learning online? Slowing down to practice kintsugi is a nice way to pass a cold and rainy day indoors. Perhaps you’ll gain a new appreciation for the wabi-sabi aesthetic of imperfection, or mottainai philosophy of avoiding waste. Or enjoy the sense of calm as you focus on your unique creation. You may just like the look of gold. There are many reasons to try kintsugi—so pick yours and give it a go.