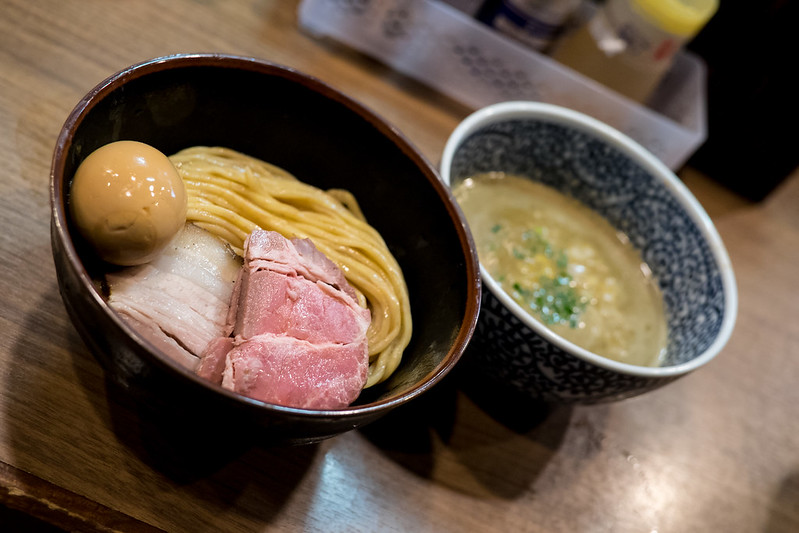 Thick cold noodles served with an intense ramen broth have been all the rage for the past decade. Start dipping into our ongoing ramen series.

Around half a century ago, some workers at a Tokyo ramen shop used the leftover noodles in a unique way for a staff meal. They served themselves heaping piles of cold noodles and dipped them into a stronger-than-normal soup. One day a customer saw this and asked to try this new creation. This was the start of tsukemen. 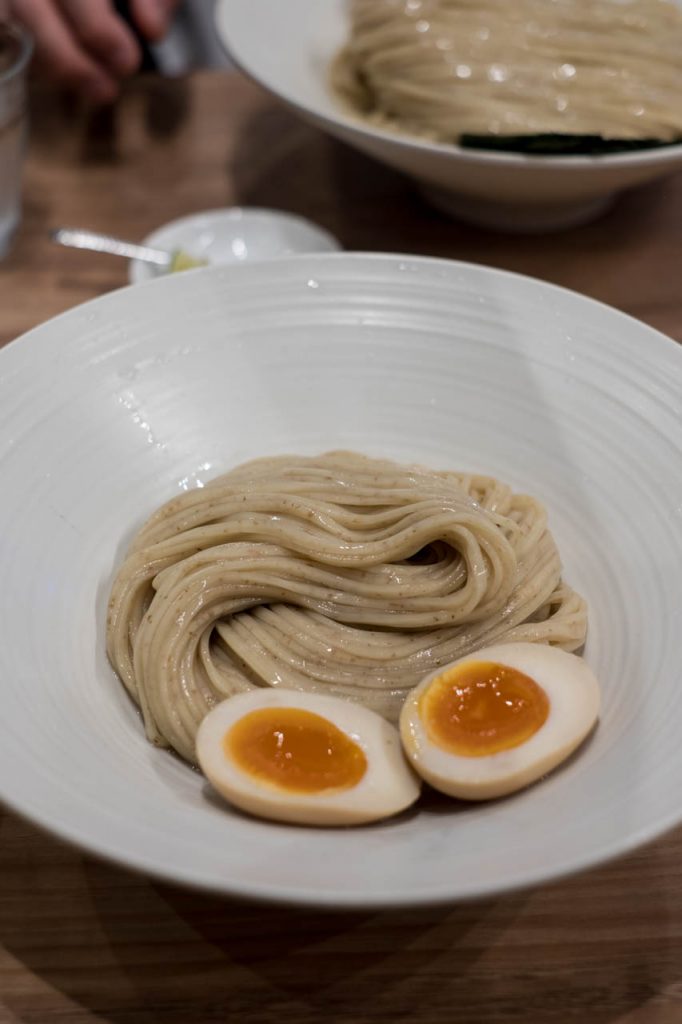 Tsukemen really took off in the early 2000s when shops started making a thick tonkotsu soup even thicker with the addition of dried fish powder. Before this, dried fish was used as an ingredient in the soup but always strained out before service. Now it was being pulverized into powder and treated as a topping. This turned out to be a perfect match with thick, cold, wheat noodles. A major draw was that, as the noodles were served cool, a shop could serve a much larger portion. While normal bowls of ramen have around 120 grams of noodles, your average tsukemen is at least 200. Many shops will serve 300 or even 400 grams of noodles for no extra charge. Salarymen and students flocked to tsukemen shops to devour massive meals. Though the trend has since simmered down a bit, you can still find many excellent tsukemen shops around Japan.

A convenient place to try incredible tsukemen is at Mendokoro Honda (麺処 ほん田) in Akihabara. Honda is one of the most famous shops in the Tokyo area, but the old location in Jujo was a bit of a trek from the city center. Now it is practically inside one of the city’s busiest stations. They are still rolling out some of the best homemade noodles in town. The soup is a rich tonkotsu gyokai blend, meaning it is made with various dried fish and seafood. It isn’t too fishy, making it a great choice for first-time tsukemen slurpers. For true fans of the bitter, fishy flavors of niboshi dried sardines, Niboshi Tsukemen Miyamoto (煮干しつけ麺 宮元) in Kamata is a must-try tsukemen shop. The soup is very much on the strong side of the spectrum, with extra dried fish powder going into the broth. Two kinds of thick-cut pork chashu top the noodles, and some grated yuzu zest adds a touch of aroma to the soup. 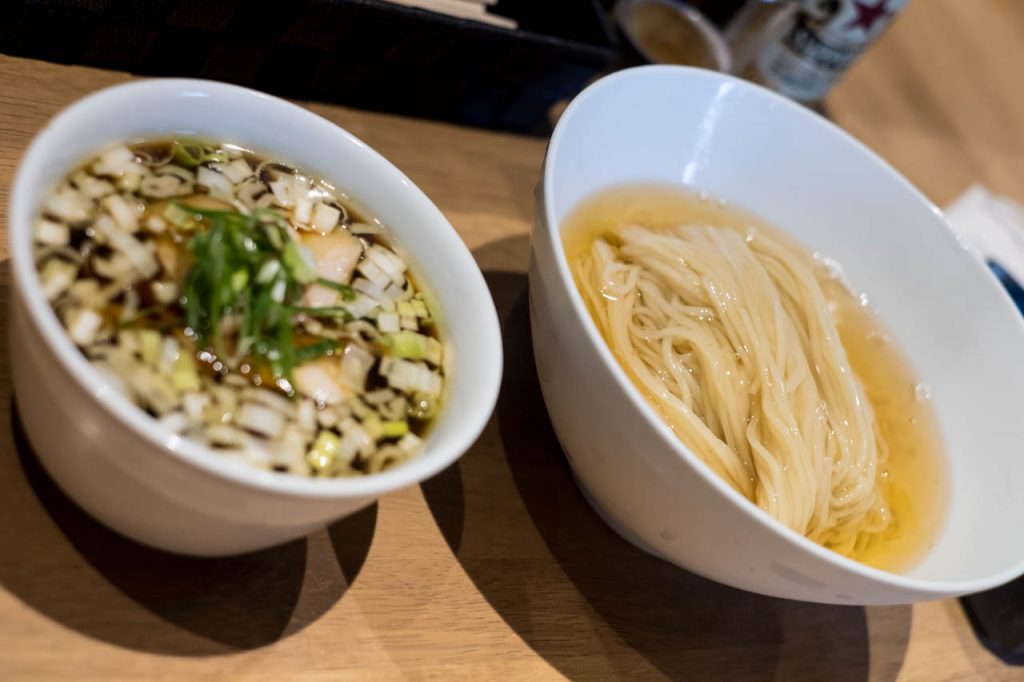 It’s also worth mentioning the latest trend in tsukemen, where noodles are now being served in a kombu dashi liquid called konbusui – a soup made from bonito and finished with kombu. Dip your noodles lightly into the bonito konbusui broth and add flavor with the “salt” served in a separate plate – this simple act alone will give your ramen a rich umami flavor. Then, soak your noodles into the broth for even more flavors. This multistep process of eating lets the customer taste the noodles a few different ways.

As you make your way through the noodles, the bonito konbusui dilutes the soup, and at the end you mix everything together and drink it down. This style can be had at a few spots around town, but Ramenya Shima (らぁ麺や 嶋) in Shinjuku is one of the newest and one of the most hyped. 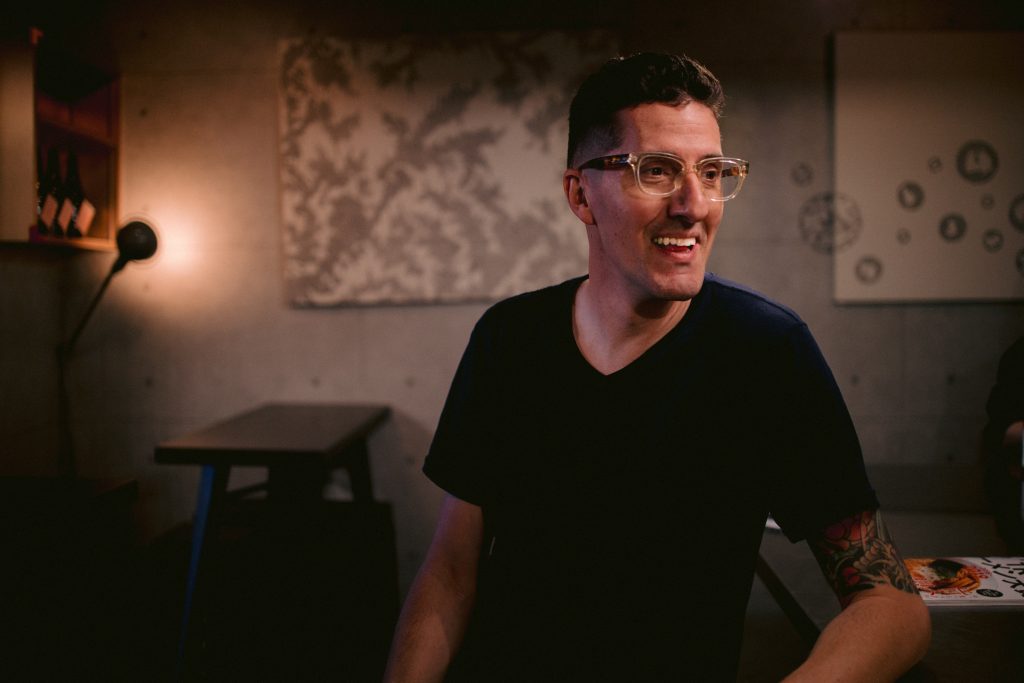