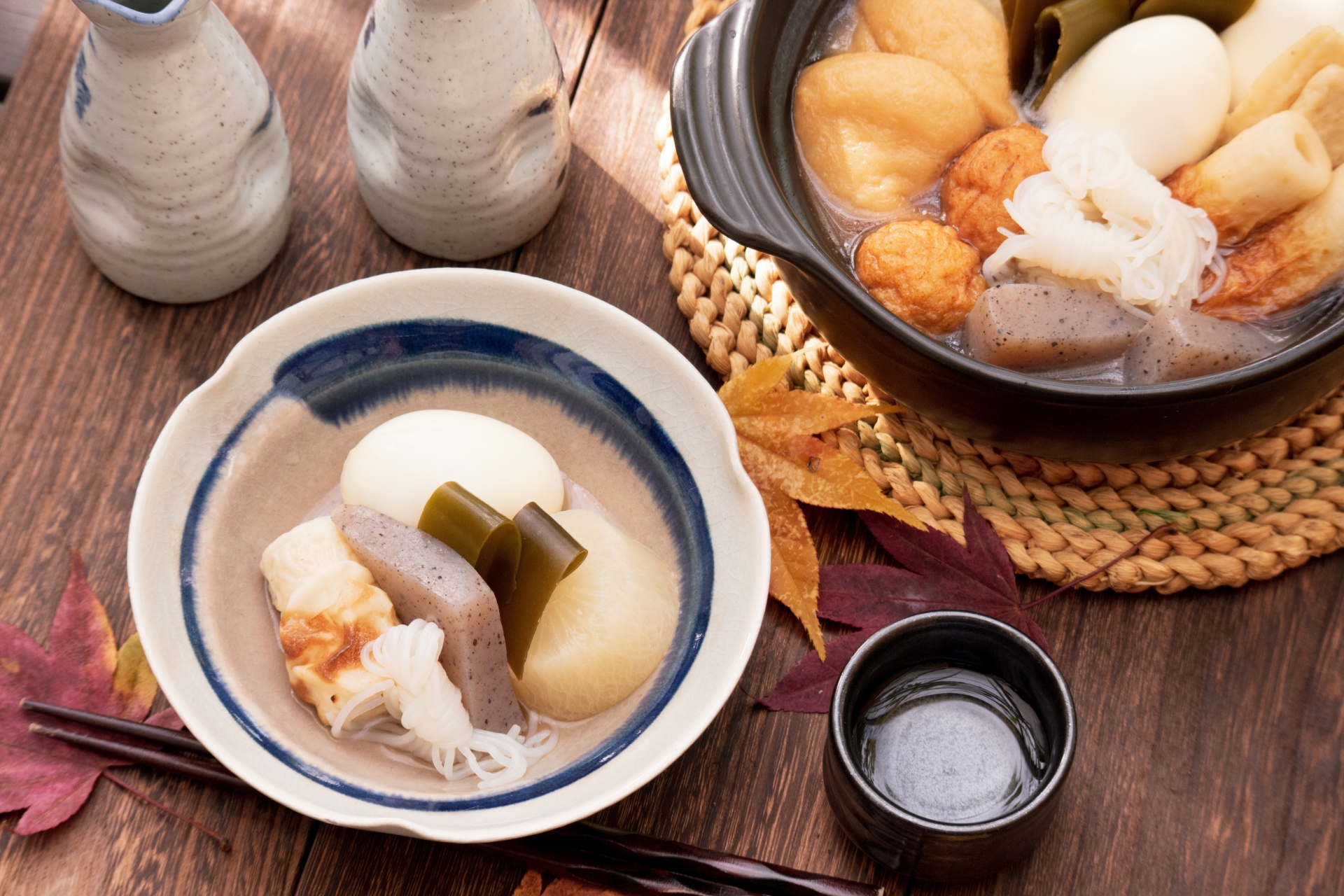 Wondering what to eat this season? This list should give you a few tantalizing ideas.

When you arrive in Japan, the first thing you will probably notice is how well nature blends into the busy and bustling cities. It’s as though the trees, flowers, and rivers will always find a way to sneak up on you. Another thing you may notice is how amazing the food is. What you may not have realized is that Japanese food—haute cuisine and casual treats alike—are actually highly influenced by Japan’s four seasons, making seasonality an important part of the experience.

As someone from Indonesia, a country that only has two seasons—rainy and dry—I feel like this seasonality is a privilege that you should definitely take advantage of when you’re in Japan.

With each passing season, Japan offers many new and different delights for your tastebuds. Japan’s food availability has long been tied to harvest times, and thanks to that, you can find fresh, flavorful, and delicious food throughout the year. While some people may find seasonal availability limiting, I personally think it is a good thing.

So, considering it’s currently autumn in Japan, why don’t I let you in on Japan’s must-try foods for this increasingly chilly season? For those residing overseas, be sure to keep these recommendations in mind for the next time you’re able to visit Japan in the fall! 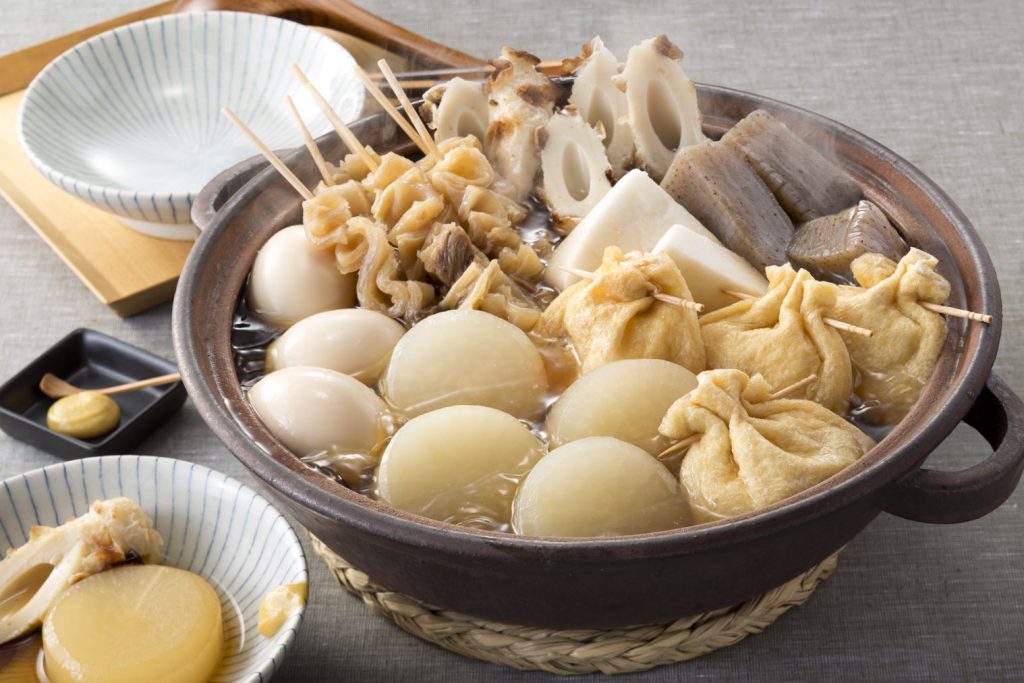 Oden is another type of Japanese hotpot dish, not entirely unlike the also-popular nabe. Unlike nabe, oden is well-known for being a convenient takeaway dish—which is why you may often see it sold at convenience stores in Japan. These convenience stores usually have a big boiler filled with trays near the cashier area—usually beside the heater for fried foods—containing different precooked ingredients that you can mix and match for your oden.

Where nabe typically uses chicken, beef, or pork meat as main ingredients, oden uses fishcakes and daikon radish. There are many oden restaurants in Japan and often they have their own specialty, which can be different ingredients or broths. If you’re more of a stay-at-home person, there are plenty of recipes on the internet you can find to make this belly-warming dish! 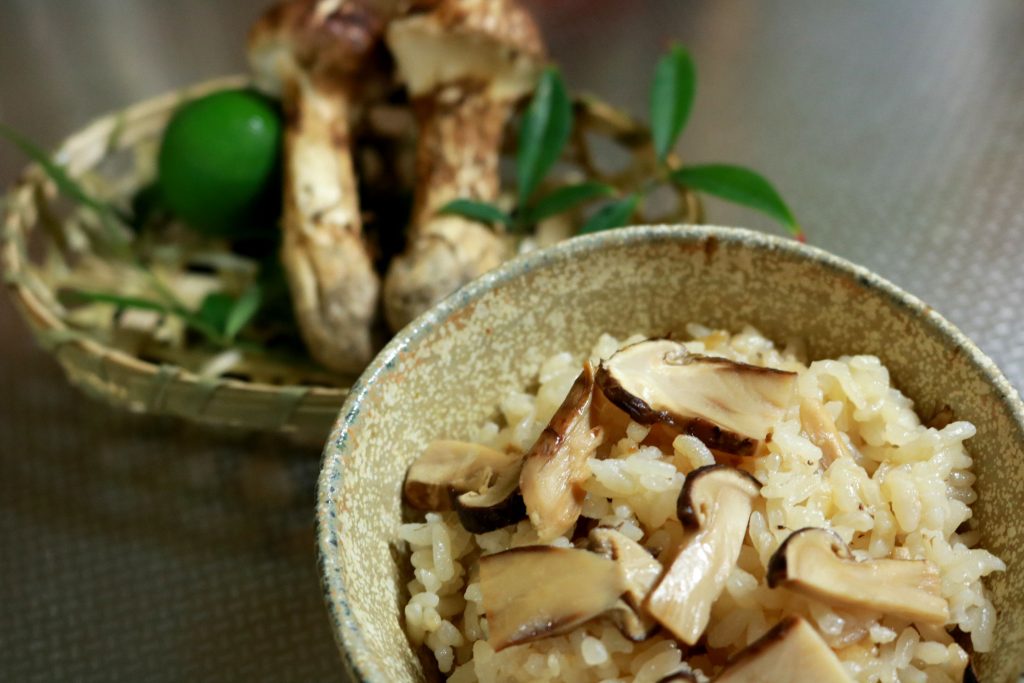 Have you ever tried mushroom on rice? Okay, that may not sound very appetizing but let me prove otherwise. Matsutake gohan is a dish made by adding kombu dashi (kelp stock) into your white rice and letting it cook along with the matsutake mushrooms you’ve added on top of the rice prior to cooking it.

Matsutake mushrooms are a certain kind of wild pine mushroom that grow on the roots of red pines in and outside of Japan. They smell very sweet, have a meaty texture, and taste quite earthy. These mushrooms are quite rare due to the fact that they can only grow under specific requirements, and they only grow in a small number of forests. With a high demand yet limited and unstable harvest, the steep price of matsutake mushrooms makes them one of the most costly delicacies in Japan.

One particularly delicious version of this dish is shinmai matsutake gohan. Autumn is the season of shinmai—literally read as new rice—which refers to newly harvested rice. Shinmai is known for its higher water content and for having better texture and flavor. For example, compared to komai (old rice), shinmai is bouncier, plumper, and has more moisture because of the higher water content. Shinmai is also sweeter and more aromatic than komai. So, if you need a reason to spend about 5,000 to 10,000 yen on mushrooms, you can think of it as celebrating the year’s successful rice harvest, and treat yourself to your very own shinmai matsutake gohan made from the comfort of your home.

Now, who hasn’t heard of sanma? If you’re new to Japan, perhaps you haven’t, but you’ll definitely want to get acquainted with this fall seafood delight. Sanma, or Pacific saury, is the first and foremost Japanese fish enjoyed during the autumn season.

You’re probably wondering, why this fish in particular? Well, that’s because sanma is best enjoyed and most delicious during autumn－hence why the kanji for sanma is 秋刀魚, literally meaning Autumn swordfish. It has the same taste and texture as sardines and mackerels, despite not being related to either fish. Charcoal-grilled sanma is crispy on the outside and juicy on the inside. It can have a slightly fishy taste, but that’s nothing a squeeze of lime can’t fix.

Grilled sanma is usually served with rice, so if you’re feeling fancy you can always accompany it with either simple shinmai rice or shinmai matsutake rice. The choice is yours.

So now that we’ve covered the main dishes, let me tell you my favorite way of ending main courses—with Japanese autumn desserts. Here are my two favorite Japanese sweets for the season: 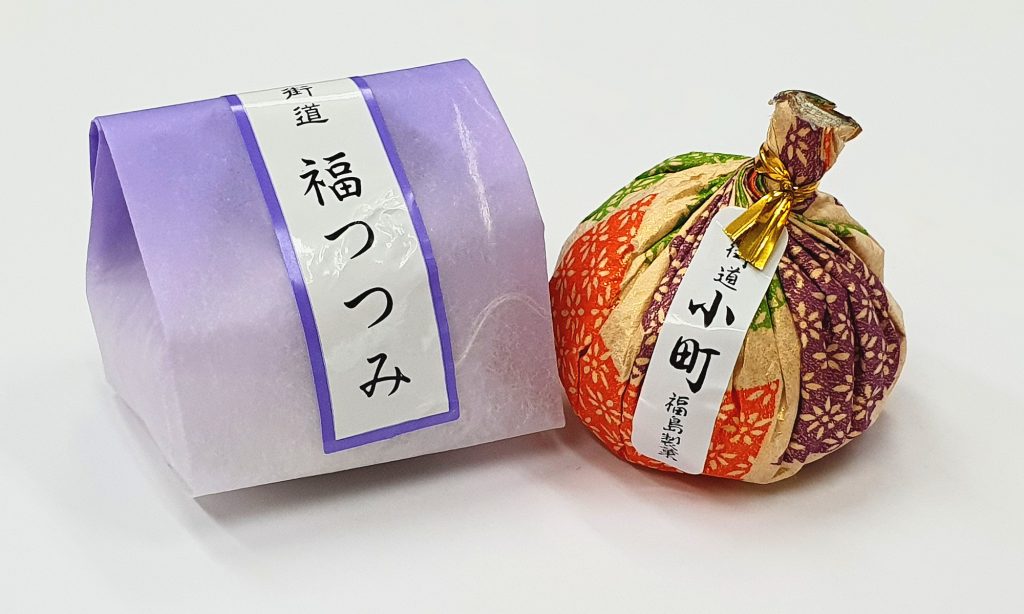 There are two ways to say “chestnut” in Japanese: kuri and maron. For Japanese traditional sweets, you’ll typically see the native Japanese word kuri, with kuri wagashi referring to chestnut–flavored traditional Japanese sweets. Western sweets, on the other hand, are often described with the loanword maron, which derives from the French word for chestnut (marron).

Two examples of excellent Japanese traditional cakes using chestnut as the main ingredient are kuri fukutsutsumi and kuri komachi. Fukutsutsumi is a wagashi made by adding chestnuts into the batter and mixing them together when made. So it doesn’t actually have a whole chestnut inside of it at all.

Komachi on the other hand is a chestnut enveloped within a gelatinous layer. Unlike fukutsutsumi, because the chestnut isn’t mixed and is instead enveloped in the layer, komachi has a stronger nut flavor when you bite into it.

Now, the reason why I like these two in particular is simple: softness and crunchiness. Fukutsutsumi is perfect for me as someone who doesn’t really like strong nutty flavors because the chestnuts are mixed into the batter, essentially toning down the nutty flavor. Not to mention, it’s almost as soft as a mochi rice cake; easy to bite and can be eaten in one go.

But on the other hand, I do love crunchy foods and that’s where komachi comes in. The chestnut inside really gives that extra crunch, and if I want to tone down the strong nutty flavor, a cup of Japanese tea does the trick!

*Please make sure you don’t have any nut allergies before eating this dessert. 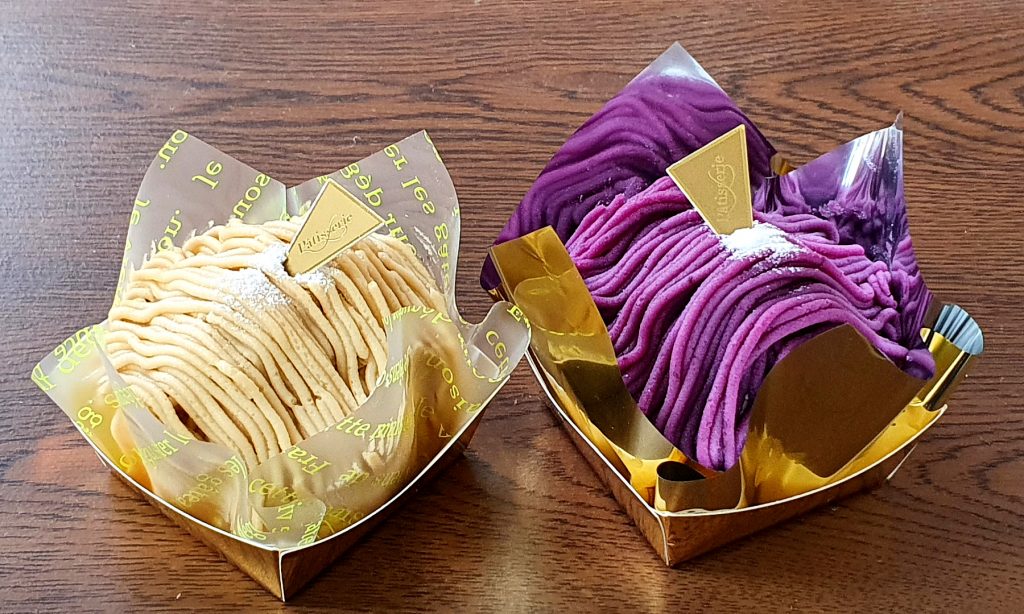 What is a monburan, you ask? Monburan is the Japanese take on Mont Blanc, a French dessert that is highly adored on this side of the ocean. Now, the typical Mont Blanc uses chestnuts as the main ingredient. But Japan loves to innovate and create their own variations. So, what do they do? Alongside the more conventional chestnut versions, Japan also uses sweet potato, another signature autumnal crop!

Speaking personally, I find this type of monburan to be just as amazingly delicious, if not more so, than its maron counterpart. This is a sponge cake–based dessert, layered with cream and Japanese sweet potato pureé goodness—perfect for those who have a sweet tooth.

And there you have it, folks!

Is your mouth watering yet? Did looking at those pictures make your stomach grumble? If so, then my work here is done. Hopefully, this list gives you the push you need to try the oden you’ve been seeing at convenience stores. Though we focused on autumn dishes in this article, no matter what season you end up visiting Japan, I highly recommend trying all the seasonal foods available. If you’re already here, what are you waiting for? These goodies are out there just waiting for you to enjoy. While international travel is tricky these days, I hope this list can serve as a reminder of what to look forward to when you’re finally able to take your dream trip to Japan. After all, you only live once—and what better way to live your life than by trying all the Japanese foods you can find? 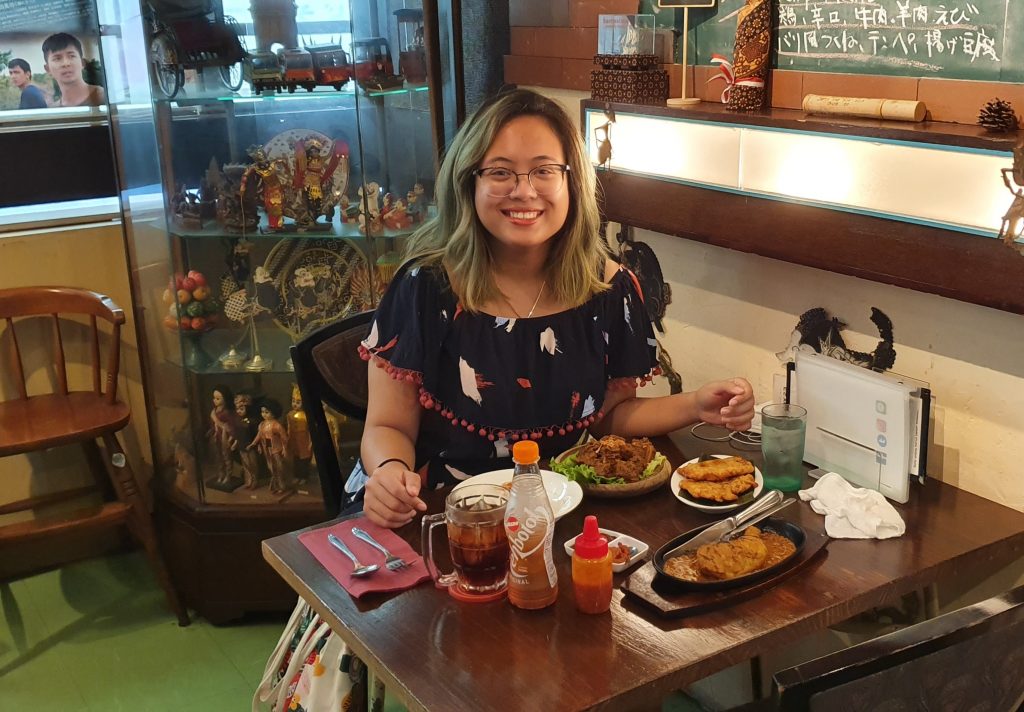 Avid karaoke goer, travel addict, foodie. An Indonesian with an Australian background, Laura moved to Chiba, Japan in 2019 after receiving her Bachelors in Japanese for a job as an English Teacher. In the midst of her busy and demanding schedule, you can always find her either at a nearby karaoke place or going on weekend adventures in Tokyo. Ignoring the obvious need to save money and not waste it on food, she always makes sure to try at least one new restaurant every weekend whenever she's out on her adventures. A true foodie at heart who can most definitely handle her spices.