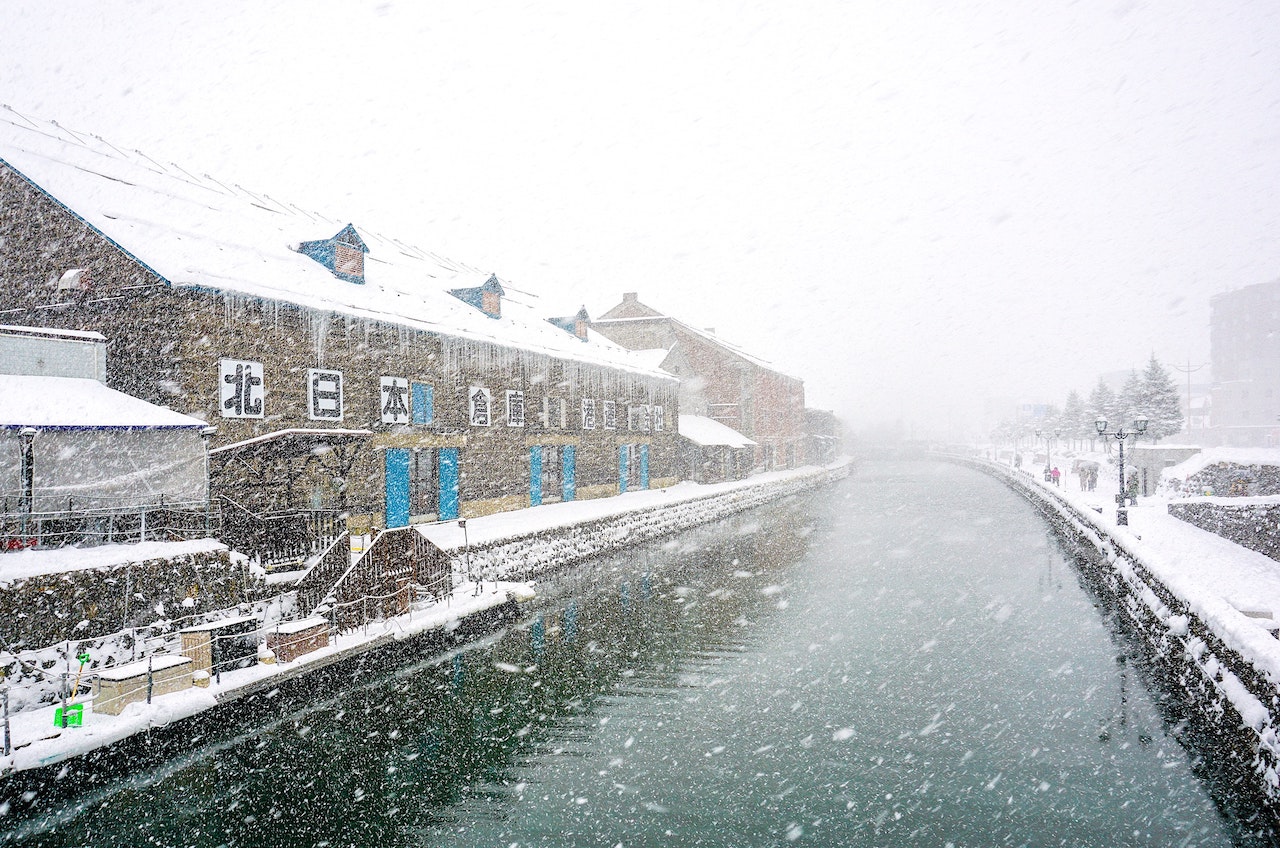 What are some recommended dishes to try in Japan’s snowy northern region? Read on to find out!

Picture Hokkaido as a winter snow globe, with an endless amount of snowflakes falling, magnificent mountains to snowboard down from and nourishing local meals to taste. Japan’s northernmost prefecture is a winter wonderland dream.

Surrounded by the Sea of Japan, the Sea of Okhotsk, and the Pacific Ocean, the island of Hokkaido boasts an abundance of seafood—some of the freshest you’ll ever taste! It is also known for its dairy products, used in dishes such as butter miso ramen and cheesecakes.

In this article, let me introduce you to some warming meals you must try when you next visit Hokkaido. When you travel around Hokkaido, there are various types of ramen to experience. In Sapporo, you’ll find a butter and miso version which originated around the 1940s. Further north, Asahikawa is known for its staple soy sauce ramen which is thought to have been created around the time of World War Two. Last but by no means least, Hokkaido’s southern port city, Hakodate, is known for its scrumptious salt-based ramen. The variety is endless and I have only just started on my journey to becoming a ramen connoisseur.

In Sapporo, there is an underground village where people can stay cozy while shopping and dining—perfect for when it’s snowing outside. On the tenth floor of the connected ESTA Building, you will find a haven of restaurants beloved by those seeking a quick fix of ramen. This is a go-to spot when you are feeling extra hungry as the portion sizes are larger than usual.

A friend recommended the butter miso ramen which I devoured with ease. Don’t forget to melt the butter first and let it seep into the corn and the noodles. The noodles were long, curly, and cooked firmly. My favorite part was the ramen eggs (known as ajitsuke tamago) which are infused with dark soy sauce. I always save these till last! 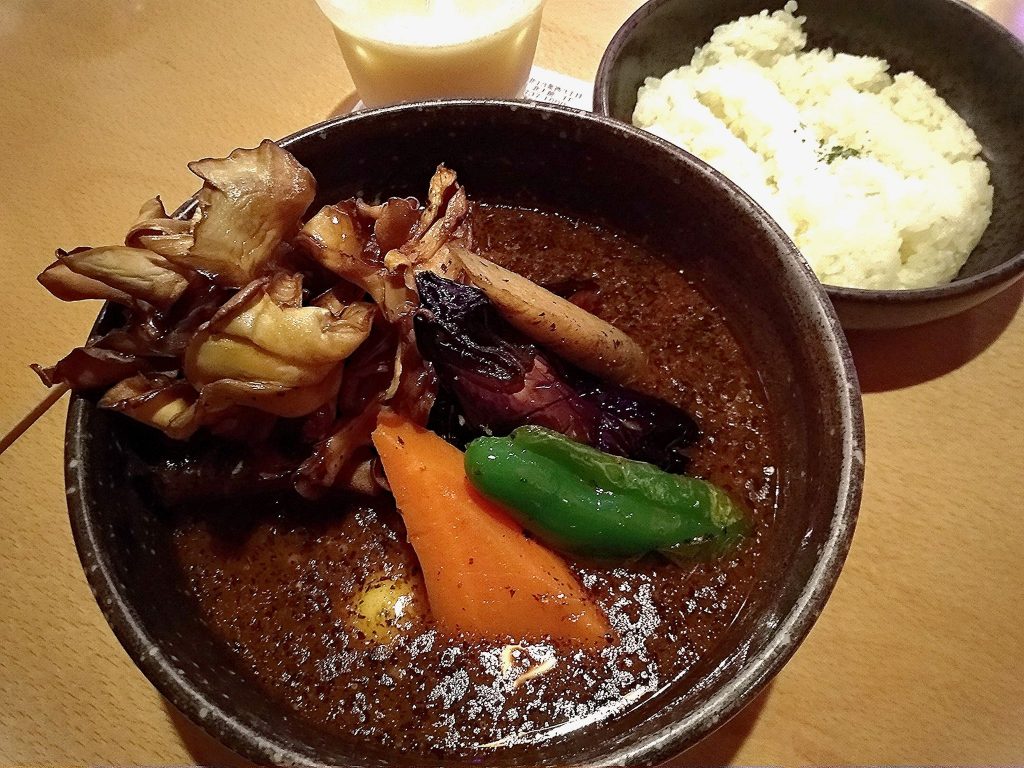 If you’re looking for a dish to warm you up on a cold winter’s night, a soup curry can do just that! This Hokkaido adaptation originated in the 1960s, inspired by Chinese medicinal soup and Japanese curry. It generally comes with chicken and/or vegetables, such as eggplant, okra, capsicum, carrots, and mushrooms.

As you enter a soup curry restaurant, the mixture of aromas transports you to the hidden alleys of South-East Asia. When you order your dish, first choose your broth, then ingredients, extra sides, and lastly, the level of spice you want. A word of caution—there is no such thing as level 0 so be prepared for a little spice in your life. I had soup curry filled with maitake mushrooms and vegetables which was served with rice. To soak up the flavor, I followed local advice and scooped the rice into the soup to eat them together.

The vegetables in my curry were served whole so it felt as though they were harvested straight from a backyard farm and cooked on the spot. It was absolutely delicious and it felt like receiving a warm culinary hug. I highly recommend trying this nourishing dish and any of the countless variations available.

It’s believed that lamb was a favorite dish of Mongol Emperor, Genghis Khan. His soldiers would cook it in their helmets! Some restaurants serve the dish on a convex-shaped grill to mimic this experience. Genghis Khan (also known as Jingisukan) consists of thin slices of mutton or lamb, and vegetables, such as bean sprouts, cabbage, and pumpkin.

Sheep were introduced to Hokkaido in 1857, after which the livestock industry grew exponentially. In 1936, Sapporo’s first Jingisukan restaurant appeared and they served the meat marinated. Nowadays, the meat is unseasoned and eaten with dipping sauce. The dipping sauce is one of a kind, with hints of apple, orange, garlic, ginger, soy sauce, and added sweetness from sugar.

When you arrive at the restaurant, Genghis Khan Juttetsu, you are greeted as though you’re joining an extended family dinner. My friends and I ordered a set menu and received an assortment of lamb. The idea is to use a cube of lamb fat to brush the hot plate before barbecuing the meat and to place the vegetables around the side. Once cooked, dip the tender lamb in the sauce before eating it. The cooking experience feels as though you are cooking around the campfire at a slow pace—enjoy it with all your senses.

Hokkaido boasts a unique cuisine you won’t find anywhere else in Japan. It will make your mouth water and at the same time, you can eat your heart out without breaking the bank! Not only is the food great, but there are also plenty of delicious local beverages to pair your meal with—some of my favorites are Sapporo beer, whiskey, and sake. Eating locally always tastes better, the produce is fresh and you’re also supporting local businesses. What more could you wish for?

Please keep in mind the current situation and make sure to check hours prior to arrival. 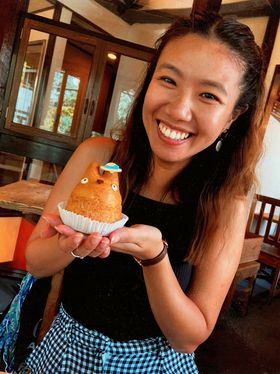 Writer, Foodie, Totoro admirer. Stephanie is from Australia. She loves living overseas and exploring off the beaten track. Her favorite destinations are London, Croatia and Nepal.  She has lived in Tokyo and is residing in Sapporo. In her spare time, she loves to practice yoga, go on hikes, write poetry, and sing along to 70s music! Follow her adventures on Instagram at @lovablesteph